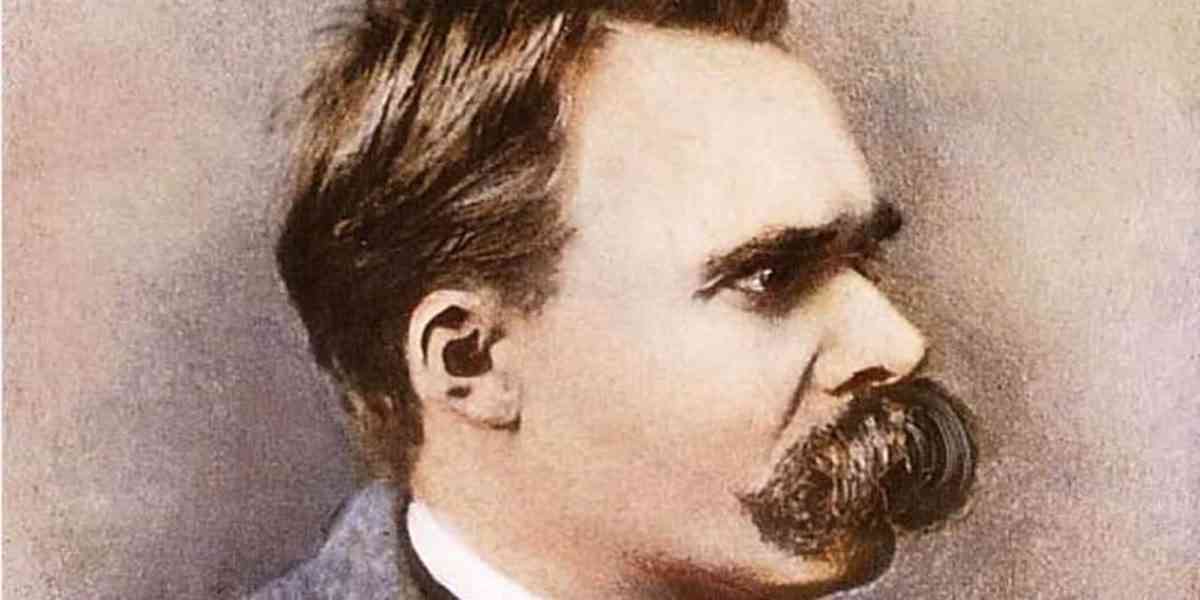 Nietzsche and the perils of denying your self

Nietzsche and the perils of denying your self
Selflessness as weakness

Is there such thing as a truly selfless act? Nietzsche criticised selflessness and altruistic deeds as often being a display of weakness, decay and a lack of belief in one’s self and one’s own goals. To help your neighbour is often to hinder yourself. However, if you are going to pursue a selfish life, you had better make sure your goals, and your self, are worth it, writes Guy Elgat.
Should one be altruistic and act for the sake of others, even at a cost to oneself? Should one’s actions be free of any egoistic motivations? Is selflessness a virtue one ought to strive for and cultivate? To many of us the answer to such questions is so self-evident that even raising them would appear to be either a sign of moral obtuseness or an infantile attempt at provocation. For Friedrich Nietzsche, the 19th Century “immoralist” German philosopher, however, the answer to these questions was by no means straightforward and unequivocal. Rather, he believed that altruism and selflessness are neither virtues to be unconditionally pursued and celebrated nor obligations grounded in absolute morality. Moreover, he thought that other-regard (regard for others) is something to be practiced, if at all, with care and moderation; indeed, in some cases selflessness could pose a great danger or even be a sign of deep existential malaise.
To approach Nietzsche’s challenging and unsettling views on this topic, it would be helpful to avail ourselves of a well-known distinction in philosophy, namely, that between psychological egoism and normative egoism. Psychological egoism, roughly put, is a view about human psychology, which holds that as a matter of fact human beings are such that all their actions – appearances to the contrary notwithstanding – are exclusively motivated by egoistic self-concern. Those who think differently, according to this view, are simply victims of self-deception: fearing to see their true visage in the mirror, they play hide and seek with themselves, never catching themselves in the act. Normative egoism, on the other hand, is not concerned with psychology, not with what is the case but, as its name suggests, with what ought to be the case. It holds that even though we might harbor within ourselves other-regarding feelings and concerns, we should struggle against the pull of these forces and become utter egoists, since we would be better off if we practiced self-love and asked, with respect to any course of action, “What’s in it for me?”.

Now, both of these views are quite radical, and to that extent, rather implausible. But it is important to see that Nietzsche rejects both of them. Take the claim of psychological egoism: despite the impression that one might acquire upon reading Nietzsche’s “middle period” texts, the period of his writing when he was mostly interested in these questions, Nietzsche is actually and very carefully arguing for a far more subtle position. Thus, in his 1878 work Human, All Too Human, Nietzsche, rather than arguing that we are all egoists through and through, sought to show that every action we perform is at least to some extent, but not necessarily exclusively, egoistically motivated. Consequently, for Nietzsche, every action is either utterly egoistically motivated, or is of mixed motivation – partly altruistic and partly egoistic.
Thus, in section 57 of the aforementioned work, Nietzsche discusses the examples of the self-sacrificing soldier or the mother who is willing to give her life for the sake of her child – clear cases of apparent selflessness – and asks:
[A]re these all unegoistic states? Are these deeds of morality miracles because they are, in [Arthur] Schopenhauer’s words, ‘impossible and yet real’? Is it not clear that in all these instances man loves something of himself, an idea, a desire, an offspring, more than something else of himself, that he thus divides his nature and sacrifices one part of it to the other? …The inclination for something (wish, impulse, desire) is present in all the above-mentioned instances; to give in to it, with all the consequences, is in any event not ‘unegoistic’ (Human, All Too Human, 57, first emphasis mine).
Notice Nietzsche’s careful choice of words here: he is not arguing that all these kinds of actions are purely and thoroughly egoistically motivated as would the psychological egoist. Rather, he takes his psychological analysis of such deeds to show that they are not un­-egoistic, that is, that they are not free of egoistic motives. As Nietzsche writes in a later section, “under strict examination the whole concept “unegoistic action” vanishes into thin air” (ibid., 133). And he immediately adds that ‘No man has ever done anything that was done wholly for others and with no personal motivation whatever’ (my emphasis). Nietzsche’s view in this work, then, is not that the unegoistic impulse in humans is non-existent, that is, that no germ of altruistic motivation is to be found in any action whatsoever. Quite the contrary, he explicitly claims in another section (ibid., 49) that this impulse is to be found operative in “almost all human action”.

Notice Nietzsche’s careful choice of words here: he is not arguing that all these kinds of actions are purely and thoroughly egoistically motivated as would the psychological egoist. Rather, he takes his psychological analysis of such deeds to show that they are not un­-egoistic, that is, that they are not free of egoistic motives. As Nietzsche writes in a later section, “under strict examination the whole concept “unegoistic action” vanishes into thin air” (ibid., 133). And he immediately adds that ‘No man has ever done anything that was done wholly for others and with no personal motivation whatever’ (my emphasis). Nietzsche’s view in this work, then, is not that the unegoistic impulse in humans is non-existent, that is, that no germ of altruistic motivation is to be found in any action whatsoever. Quite the contrary, he explicitly claims in another section (ibid., 49) that this impulse is to be found operative in “almost all human action”.
But why would Nietzsche wish to argue merely against the view that actions motivated purely by other-regarding motivations are real? One answer is that this is precisely Schopenhauer’s view, for Schopenhauer argues in his important On the Basis of Morality (1839) that the moral worth of actions depends crucially on their being purely altruistically motivated, that is, motivated by pure compassion, and, furthermore, believed that such actions are real. Given that Human, All Too Human was Nietzsche’s great declaration of independence from his erstwhile mentor, we should not find it surprising to see Nietzsche arguing specifically against Schopenhauer’s view.
But Nietzsche’s analysis has an interest that goes beyond mere philosophical parricide: he also could be read as claiming that the oh-so-common moral enjoinder to be selfless, by giving the appearance that such a thing is really possible (doesn’t “ought” imply “can”?), engenders a psychological falsification and thus contributes to our lack of self-knowledge. Furthermore, as long as we are held captive by the view that complete selflessness is possible, we might recurrently suffer from guilt at our failure to ever achieve it. Being more psychologically realistic could enable us to lower our expectations from ourselves and thus alleviate such a sense of guilt.

Nietzsche’s criticism does not end here, however: in Nietzsche’s eyes, the very valuation of altruism is in itself suspicious and a symptom of some kind of weakness or “sickness”. To regard selflessness and altruism as good and thus to try as much as one can to help one’s neighbour is a sign that one has no why or wherefore in one’s life, that one has no aim or goal of one’s own. As Nietzsche puts it: “The value judgment here is at bottom: “I am not worth much”” (The Will to Power, 373). The person who thus suffers from his own “impotence [and] the absence of great affirmative feelings of power” (ibid.) cannot stand his own company and wishes to flee from oneself and into the other. Altruistic action thus provides the means of escape: “You flee to your neighbour from yourselves and would like to make a virtue of that: but I see through your “selflessness””, thus spoke Zarathustra (Thus Spoke Zarathustra, “On Love of the Neighbour”). Pushing his suspicions even further, Nietzsche speculates that the valuation originally placed on altruism, insofar as it encourages acting for others instead of oneself, is an expression of what he calls “herd morality” – the morality of the many and the weak, the function of which is to preserve the community and, at the same time, to cut the noble individual, the person of great tasks and goals, down to size. It is precisely the “slave revolt” of Christian morality, with its high valuation of “love of one’s neighbour”, that sought to bring down the powerful and self-confident “masters” and make the latter suffer from self-lacerating guilt and, consequently, toe the line. On the other hand, Nietzsche claims, “if one feels one’s danger and aberration […] in disinterested and selfless actions, one does not belong to the herd” (Will to Power, 286). Indeed, acting for the sake of the other, and in particular when the desire to so help is stirred by the emotion of pity, is a seduction, a siren call that threatens to lead the person of great tasks into shipwreck. As Nietzsche himself confesses, there are “a hundred decent and praiseworthy ways of losing my own way, and they are truly highly “moral”! Indeed, those who now preach the morality of pity even take the view that precisely this and only this is moral – to lose one’s own way in order to come to the assistance of a neighbour” (The Gay Science, 338).
Crucially, however, all of this should not be misunderstood as a defence of, and as an attempt to promote, normative egoism. This is because Nietzsche, in contrast to normative egoists such as Ayn Rand, was explicitly not of the view that everyone, regardless of who and what they are, should practice self-love. Rather, his view was that one first had to possess the right to egoism and this, so he thought, depended on whether one represented “the ascending course of mankind” or not (Will to Power, 373). It is only the healthy “noble soul”, full of future and promise, to whom egoism belongs “by nature” (Beyond Good and Evil, 265): a person such as this possesses “the unshakable faith that to a being such as [himself (Nietzsche was not a great adherent of gender equality)] other beings must be subordinate by nature and have to sacrifice themselves” (ibid.). In contrast, “the cult of selflessness” must be practiced among, indeed imposed upon, those who are of “little value”, lest they stand in the way of those who are “well-constituted” or disturb the peace of the class to which they properly belong with feelings of envy, rivalry, or ressentiment (Will to Power, 373). No: selflessness is not for everyone; it is only proper to the weak.
But who is “master” and who is “slave”? Who represents “ascending life” and who is “sick” and “decaying”? And who is to say what criteria should be adopted to determine the answers to such questions, and on what grounds? Indeed, who is to say who is to say? Absent of clear and cogent answers to such questions, the risk is run that in the end it will be those who “feel reverence for themselves” (Beyond Good and Evil, 287) who will select themselves as worthy of egoism. This is not merely a recipe for ethical subjectivism, but for a world over-populated with pompous blowhards at best, or murderous tyrants at worst